Having an awesome kick sample in a loop can be frustrating when you want just the kick. There are a few simple tricks you can follow to extract the kick to use on its own.

Depending on the original loop and how much ambient sound surrounds the kick will determine how clean you can get the kick in the end. Most loops will have some sort of high end frequency on the kicks attack transient, either a closed hi hat or a ride for example.
The first thing to do is fine the cleanest kick from the loop that has the least amount of extra sound on top.

Then by simple filtering techniques, the kick can be sufficiently cleaned with very good results.

Here is an example of a loop that we could want the kick from to use on its own.

Then, the result after filtering the high frequencies away.

I have used Logic Pro’s EXS24 sample plug in for this example but the same process and techniques could be implemented using most sample players and DAW’s.
Using the LoPass Filter, LFO 1 and ENV 1, we are then able to reduce the high freqencies from the loop.
The loop has been triggered every beat as the LFO and ENV settings will only activate on key down events.
It is also a good idea, at the start, to trim the loop down to a single beat as this will help with any release settings you may use later.

LFO has been set to close down the filter from it’s zero point. Experiment with the LFO speed and the zero point of the Filter until you are happy with it.

ENV 1 can now be added to introduce some of the attack back into the effect, needed if you have reduced the zero point of the filter and thus losing some of that high end.

Set the ENV 1 attack to 0, then the ENV decay to quite short. Again play with this until it gives the desired effect. 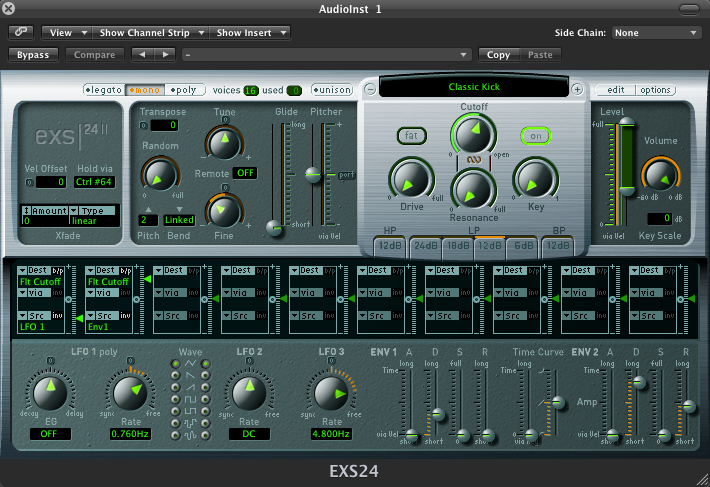 These settings will need to be altered with every example due to the content but once you understand how it works, it is easy to clean up those dirty kick loops.
You will never be able to completely remove all traces of high end content on the initail attack of the kick unless you are willing to bring down the zero point of the filter enough to do so. It’s usually a trade off and your choice.

Remember though, your production will most likely have it’s own content that will bring back this area anyway, or you could then try mixing back in the high end frequencies from another kick.

Number of items in basket: 0